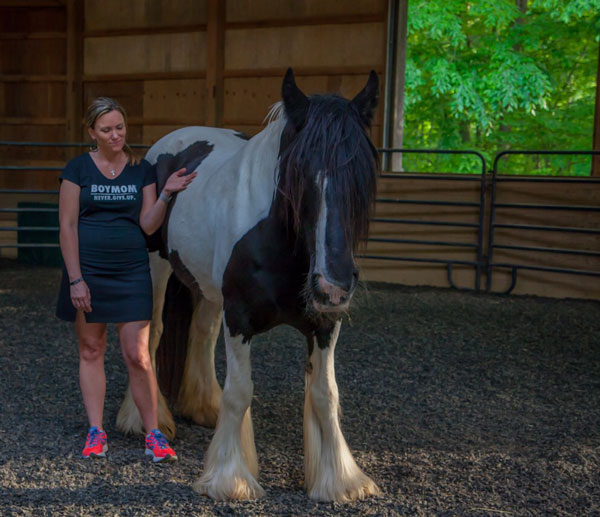 I had the pleasure of watching one of our horses at work yesterday. In her quiet presence, our girl, Iron Horse Carolina, took charge of our session. In response to my offer of a free ½ consultation here at the barn, I had a woman (I’ll call her June) and her husband stop by to meet me and our horses to see if we were a match for what she was looking to heal. What Carolina did while we talked was magnificent. I’m not sure I can do it justice with words, but I’ll do my best.

As we headed out into the pasture to visit the horses and to show them around the property, Carolina came right up to us. And right behind her came Baco. He considers himself the alpha male in the herd and in his horsey way was intent on butting in. Carolina clearly said, “No, this girl is mine!” Baco listened, and then watched from a distance, giving Carolina a chance to do her magic.

Together June and her husband were telling me about why she was seeking healing. I was aware that Carolina was very drawn to this couple, as she walked right over to be with them. I didn’t understand her insistence until I heard their story, which was so similar to Carolina’s.

I asked June what drew her to our program and what it was that she would like to see change in her life through our working together? With courage, she began sharing her painful and heartbreaking daily struggles. Carolina’s first healing move was to stand with her huge heart right next to June’s, giving her support as she explained her trials.

Her husband stepped in and explained the details, while June loved on Carolina. What she didn’t know was that Carolina was loving on her, too. As he walked through their history of pain and surgeries, I watched Carolina move around and match up her body to June’s. As the list of struggles that this couple has been through was described, she kept moving around June. While June wanted to move with her, I asked her to stay still and let Carolina give her healing support.

While her husband was talking about the procedures that June went through involving her stomach cancer, Carolina moved her body from the heart to standing stomach to stomach with June. Next, our discussion went to June’s reproductive organs. Again, Carolina moved, matching up the reproductive area of her body to June’s. The couple went on to say how debilitating her health is to their lives, at which point Carolina moved again and gave June her backside, which is the area on a horse that is stability and grounding.

A little of what I know of Carolina’s background is that she has had a severe colic in the past, which almost took her life. She has lost sight in one eye. And since she has been with us, we’ve had to remove a couple of spots on her that proved to be cancer. I believe that this is why she was so adamant about standing with June.

Carolina moved back to June’s heart as we were completing our conversation and as she shared how horses have been a part of her life in the past; how much she loves and appreciates them. In tapping into the joy horses have given her, June knows that it will be the horse that helps her heal. She recognized that together the horses and I will give her hope and lead her toward a more fulfilled life.

As our discussion moved into making future appointments, Carolina moved away. Her work was done. I asked June to contact me later in the evening to tell me if she felt any lasting effects of Carolina’s healing power. Her reply later was that her insides were feeling great.